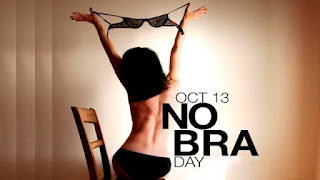 World no bra day is celebrated in October 13 every year, which falls right in the middle of Breast Cancer Awareness Month. The motive of the day is to promote breast cancer awareness in both men and women and encourages all to spot early warning signs and get an edge in the fight against the disease. The movement also encourages gender equality.

However, women in general are encouraged to go bra-less on this day in order to remind people that breast cancer is a potentially fatal disease, but also one of the most preventable forms of cancer.

The origin of this day goes back to July 9, 2011, but within three years it had moved to the 13th day of the Breast Cancer Awareness Month. The original event known as “BRA Day”, was started by Toronto plastic surgeon Dr. Mitchell Brown. She organised the first event of the day titled “Breast Reconstruction– An Evening of Learning and Sharing” in Toronto, Canada at Women’s College Hospital and Toronto General Hospital.

For years, women have protested the physical and cultural restrictions imposed by bras. It is to interpret rejection of society’s perception of women’s bodies and dress requirements.

Social media users trends the hashtag #nobraday on Instagram and Twitter especially, alerting women of breast cancer symptoms, and encouraging them to conduct regular self examinations.

What is Breast Cancer

Breast cancer is a cancer that occurs when cells around the area begin to grow out of control. It usually forms a tumor that can often be seen on an x-ray or felt as a lump. Although, it occurs almost entirely in women, men too can get breast cancer.

It is important to note that most breast lumps are ‘benign’ and not ‘cancer’. This non-cancerous breast tumors are abnormal growths, but they do not spread outside of the breast. They are not life threatening, but some types of benign can increase the risk of breast cancer for a woman. However, any kind of lump should not be ignored and regular health check ups might decrease the future cancer risk.

Thickening or swelling of part of the breast.

New lump in the breast or underarm (armpit).

Redness or flaky skin in the nipple area or the breast.

Nipple discharge other than breast milk, including blood.

Nipple discharge other than breast milk, including blood.

Keep in mind, these symptoms can also appear due to other reasons that are not cancerous.