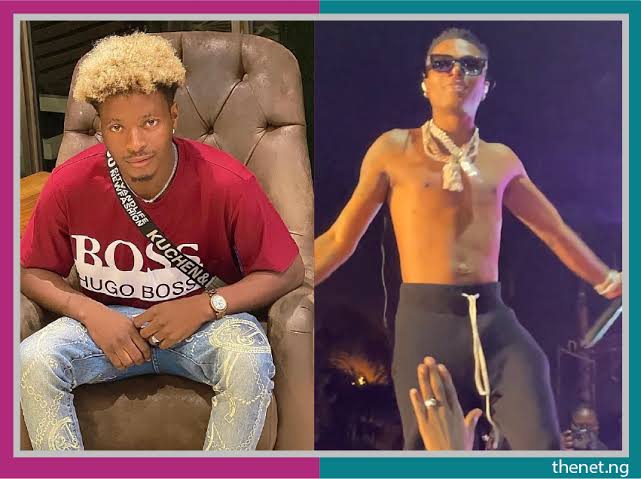 Robert Icon, one of the two excited fans who dragged Wizkid on stage during a concert in Abuja in the early hours of Saturday, December 18, 2021, has said the singer is like his ‘god on earth’.

“Wizkid is like my god on earth,” he told Netng in a telephone conversation on Saturday, December 18, 2021. “I’ve been planning to do this since January because I know he will be coming to Abuja.”

While the globally-celebrated artiste was performing one of the singles from his ‘Made In Lagos’ album at the edge of the stage, he was pulled by his left leg by Robert, who managed to crawl onto the stage, while the other fan hugged him tightly and refused to let go.

Despite the intervention of security guards who rushed to rescue Wiz from the grip of Robert and the other fan, the excited fans held on to Wiz until he fell on the stage.

The incident caused mild drama on the stage. After Wiz was pulled off from the grip of the fans, one of them ran to the stage again, prompting the security guards to beef up security on stage.

The Abuja based 18-year-old up-and-coming singer said he travelled to Abuja from Lagos on Wednesday, December 15, because of the concert. He wanted more than Wiz’s leg, “I wanted him to recognise me as an up-and-coming artiste.”

“I’ve been a Wizkid fan for 10 years. I love him so much,” he said. “To tell you how much I love Wiz, I even bought four tickets worth N100,000 for my friends because I wanted them to be at the concert.”

He also told Netng that although he had a VIP ticket, he begged bouncers for three hours to grant him access to the VVIP section before Wizkid’s arrival so he could have access to the singer.

“When I finally gained access to the VVIP section, I begged people to lift me so I could climb the stage,” Robert said. “The beating from the bouncers almost ruined my experience, but I feel fulfilled.”